Please see the interpolation part one discussion, as it contains some of the basic information this tutorial will build on.

The previous discussion focused on contour generation. This discussion will focus on wind.

Wind is an example of a parameter that requires two GRIB records. There are two ways that a GRIB model can represent wind:

Most GRIB files use the first method to represent wind - the files describe wind as a vector defined at each point.

Math is wonderful. The techniques for adding two vectors, subtracting one vector from another, and so many other geometric operations are very well defined, and once understood, often quite beautiful.

The problem is: calculate a vector, C, which is an even mixture (an average) of these two vectors

This is roughly the problem that GRIB viewing applications are required to solve. Obviously, rather than the average, the applications need to be able to generate interpolations (mixtures) for any proportion of the two vectors. (GRIB viewers actually need to deal with at least four vectors when interpolating, not two, but two is easier for the purposes of illustration.)

The average of two numbers is simply:

You could use this same formula to find the average of two vectors.

After reading the problem statement above, its clear that the resulting vector is going to be pointing NorthEast - the average of North and East.

The important question is: what is the resulting vectors magnitude?

Since each of the two initial vectors have a magnitude of 10 (the wind speed is 10 knots,) you would expect that the resulting vector also have this same magnitude…right?

In this case, when the two vectors meet at a 90° angle, the magnitude of the green vector, its length, is 7. This is 30% less than the proper value. i.e. the simple average of these two winds, each 10 knots, results in a wind speed which is only 7 knots.

The main issue being raised here is that the math behind interpolating two vectors to yield a direction is pretty simple and straightforward. Everybody is going to get the direction right (NorthEast in this case.) However, the magnitude of the resulting vector is not as well defined - application developers have a choice to make regarding this aspect of the calculation.

Lets look at an example.

If you would like to test the data from this example in a GRIB viewer of your own choice, its the same file as is used in the previous example. Please see that article for a link to it. 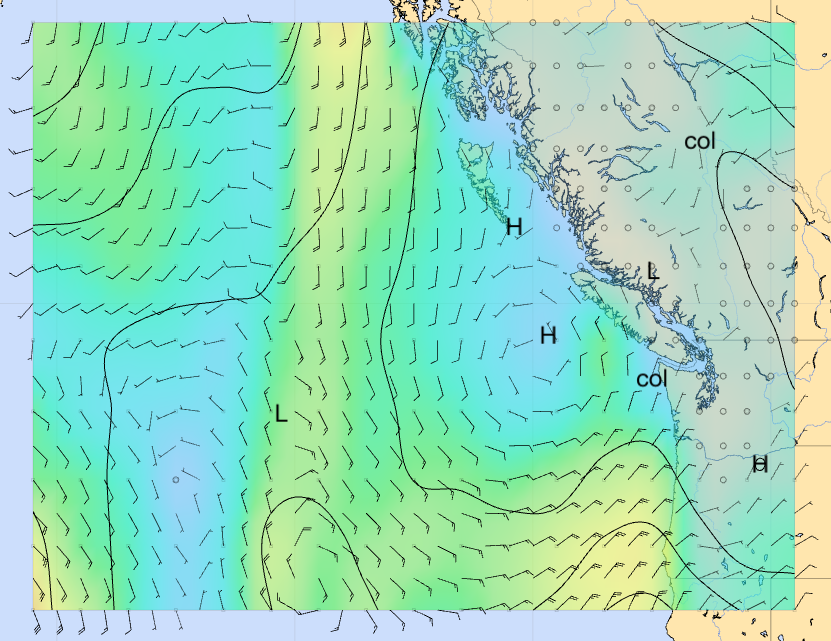 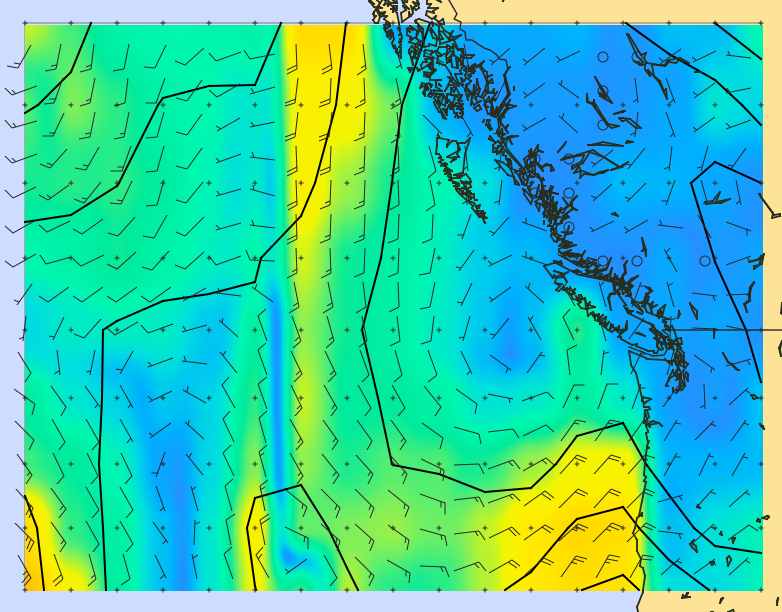 An attempt has been made to match the colors and other attributes in these two images, so that they look as close to each other as is possible.

The portion of the two images I wish to focus on, is the wind speed in the front: 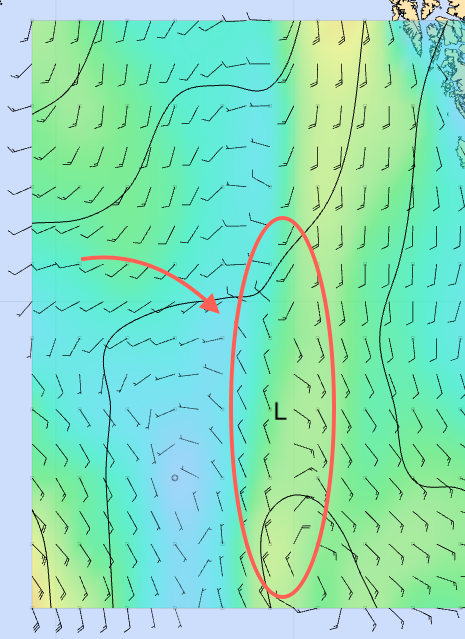 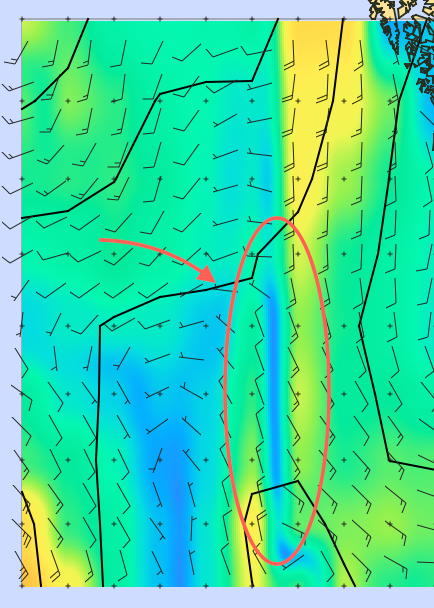 What’s going on here? Why the difference?

This is a perfect example of how two applications have made different choices in how to implement vector interpolation. 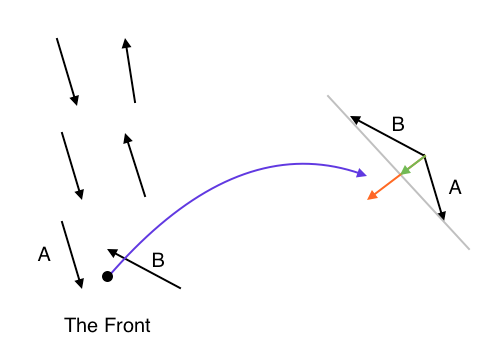 On the left hand side is a representation of the winds along the front. In this example, the vector at the dot is being calculated on the right. The green arrow is the simple average while the red vector properly accounts for magnitude. Note how short the green arrow is.

zyGrib, and I believe many other GRIB viewers, is not properly accounting for the vector magnitude - it is yielding the green vector from the image above. The green vector has the proper direction - but the wrong magnitude.

Again, the two images of the region in question:

How big can this problem be?

For purposes of this discussion, the two techniques for interpolating vectors will be:

In areas where the wind is flowing all in roughly the same direction, the simple technique for calculating a vector interpolation will yield a value very close to the correct technique. As the angle between the two vectors starts to diverge more and more, the simple technique starts to report answers which have increasingly wrong magnitudes.

This is mainly an issue in areas of disturbed wind flow, when the computer model is reporting wind directions that are quite different from each other at points close in a GRIB file - around fronts and other weather features.

A table showing the amount of error, assuming both vectors have the same magnitude:

Note that the error is less than 8% when the two vectors differ by up to 45°. The errors start to increase rapidly beyond around 60°. When the two vectors point in opposite directions, differing by 180° then the answer will be the zero length vector - which is completely wrong.

This is what is happening in the area of the front, above.

If you are using a GRIB viewer which uses the (incorrect) simple technique, it could be seriously underestimating the winds you will be sailing in. By contrast, the complex technique will report very accurate interpolations of the wind speeds that are in the file.

Looking at the comparison images for LuckGrib and the other GRIB viewers, you may think that most of the wind speeds being reported appear to be pretty close. Its only in a small region that they differ. However, when sailing a long passage we often do not have a lot of control over where we end up sailing - weather can move faster than our sailboats. When I am sailing in the area of one of these weather features, I want my GRIB viewer to be reporting as accurately as is possible. LuckGrib does that.

The people who develop the computer models behind the GFS, CMC and all other weather models spend an incredible amount of effort in order that they produce as accurate a result as is possible. The computer models are by no means perfect, but a huge effort has gone into their creation, and the author of LuckGrib respects their effort.