Previous articles in the Nerd Talk series talk about how LuckGrib strives to produce high quality and accurate results. This is a good thing - you need to be able to trust the images your GRIB viewer is showing you.

Generally, the effort to create high quality, accurate results is a good thing. This article discusses some of the process behind how LuckGrib produces the points labeled H, L and col on the mean sea level pressure fields that are so common in GRIB viewers.

This article comes along with a small apology - LuckGrib is trying hard to create accurate results, and at times this can result in it trying too hard and creating more points of interest than you would like to see.

I hope that once people understand what is going on, they will appreciate the results.

Recall that a GRIB record defines values on a grid, where each value is independent. The GRIB record describes only the values, not what happens in-between the values supplied.

In its implementation of interpolation, LuckGrib creates field interpolators, which are the objects it uses to create a smooth, two dimensional interpolation of the discrete data points supplied in a GRIB record.

If you consider a two dimensional, smooth field representing the mean sea level pressure for some area, the points of interest for this field are the points that represent local minima, local maxima and saddle points. Clearly these names are somewhat mathematical. What each of these mean is: 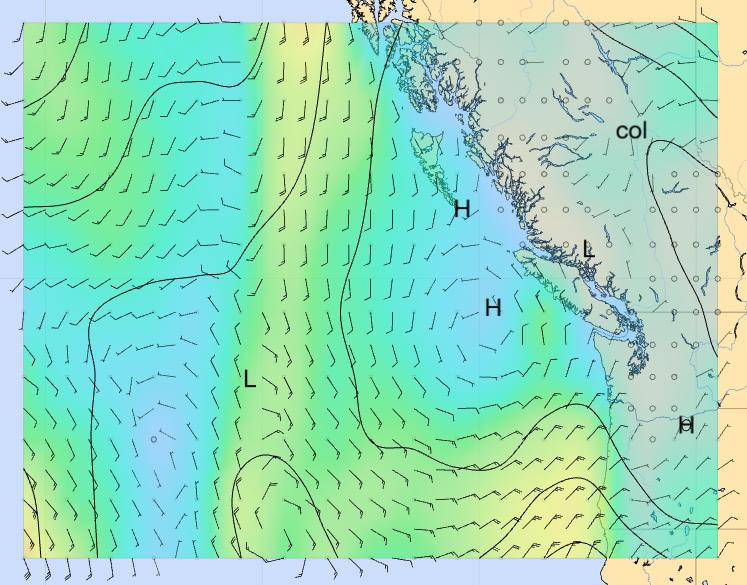 This image contains two ‘L’s, three ‘H’s and one col.

Consider the western most L - its not clear what it is showing - it should be identifying a local minima, but its not clear from the image that one is present at that location. Similarly for the lower H - is that really a local maxima? Zooming into each region and showing a contour using LuckGrib’s dynamic feedback capability clarifies the situatation. Both of these regions are correct - one is a local minima and one is a local maxima. 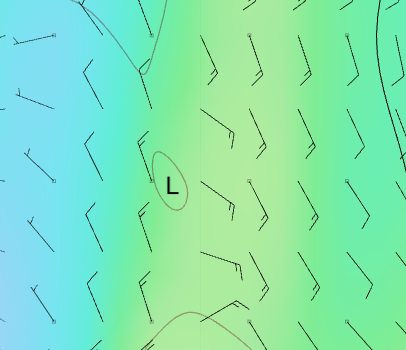 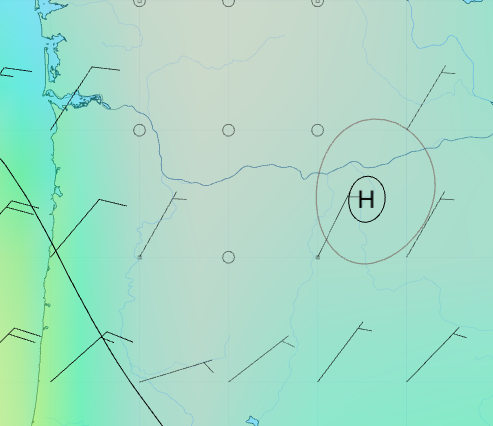 This is where the start of the apology starts…

LuckGrib shows you all of the stationary points that it finds, rather than trying to choose among them and showing you only the important ones

In the case where LuckGrib has hidden some stationary points due to their being too close to some other point, you can reveal the extra information by zooming into the region. By zooming in, you provide more room for the display of the symbols and LuckGrib will show them. 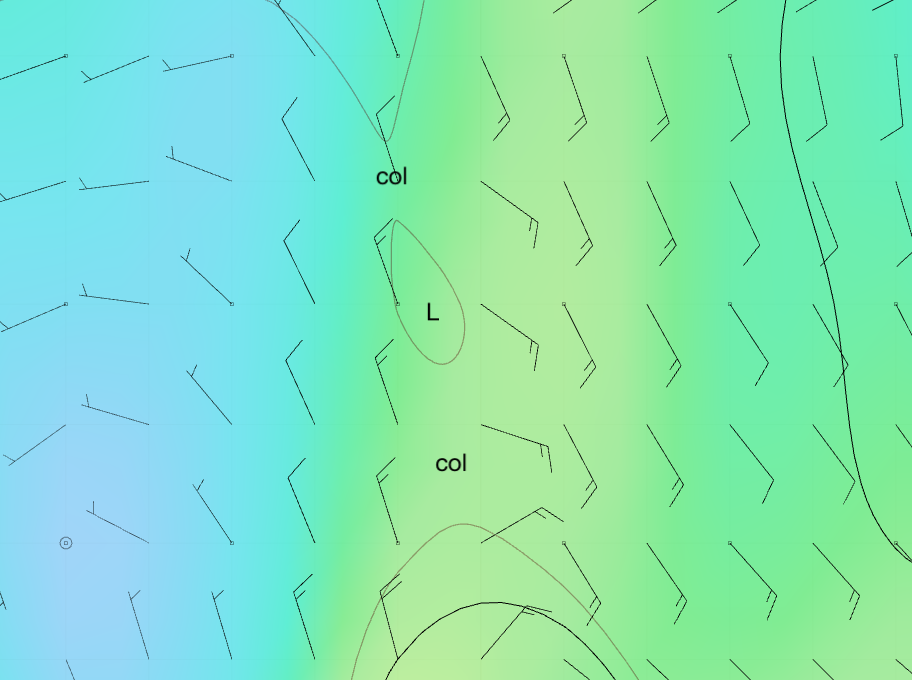 The image above is the result of zooming a little into the L on the left. As you zoom in, LuckGrib sees that there is more visual room to display more information and starts to present some of the stationary points that it had earlier hidden, to avoid clutter.

If you study the image, or better yet, view the GRIB file directly, you will see that, from either col, if you travel east or west the pressure increases and if you travel north or south the pressure decreases. This is exactly what you expect at a saddle point - again, LuckGrib is properly identifying the points.

As it turns out, one of the many benefits of the implementation details behind the field interpolators that LuckGrib is using as part of its two dimensional interpolation of the GRIB records, is that the approach lends itself well to the accurate positioning of the stationary points.

It may not be hugely important - but the position of each of the stationary points presented is very accurate. You may not care if some other GRIB viewer were to place the symbol is a little to the west or east of where it should be. As in many other areas, LuckGrib is working hard to be as accurate as possible, and the stationary points it produces are accurately positioned.

Highs and lows in the tropics:

Mean sea level pressure in the tropics varies much more gradually than at higher latitudes. What you often end up with is large areas where the pressure is fairly uniform, varying a little bit, up and down. When viewed in LuckGrib, you end seeing a lot of stationary points: ‘H’s, ‘L’s and ‘col’s. For example, the image below.

This is an area north from New Zealand, just south of the equator. Notice that there are no contours generated - all of the points are within around 2mb of each other. There are a lot of points shown, and they all properly represent a H, L or col.

If you were preparing this image yourself, you likely would not place any of these symbols on it. Consider the test:

would a professional forecaster create this image?

LuckGrib is showing much more detail than a professional forecaster would. However, all the points are valid and once you understand what’s going on, its easy to simply ignore this extra detail. The image LuckGrib is showing you is saying that the pressure field is highly uniform with slight variations.

In March 2015, what remained of cyclone Pam passed by to the East of New Zealand. 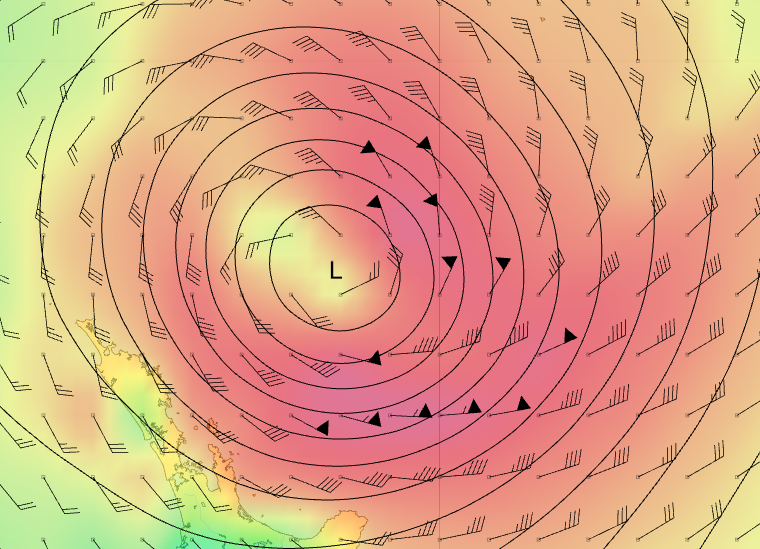 The image above is showing wind and pressure. Its pretty clear that the L is where it is supposed to be, smack in the middle, just as you would expect. 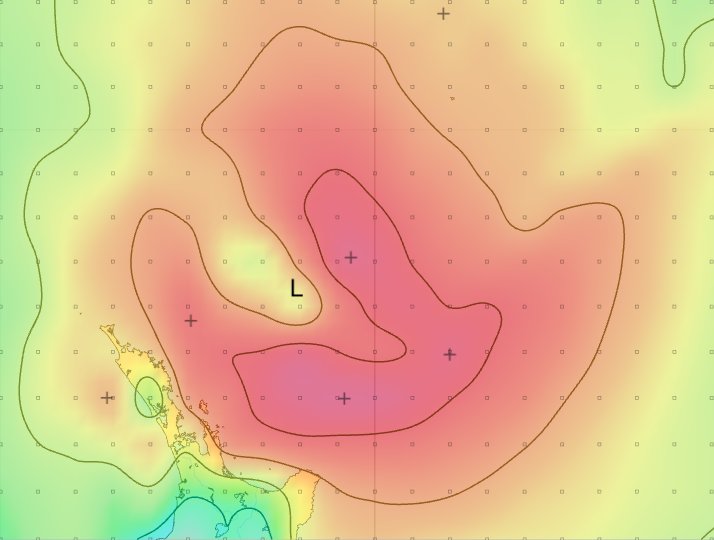 If you are trying to identify where the maximum wind is in this type of system, having the application show you the local maxima is very useful. To find which of these local maxima is the largest, simply move your cursor over each one and read off the wind speed.

Notice that there are five local maxima shown. Earlier I was saying that at times LuckGrib shows you too much information, but that this was a delibrate decision, allowing you to ignore or pay attention to what is being shown. In this case, if you happened to be anchored in the Bay of Islands, as s/v Luckness was, watching this system pass by, having the application show you a lot of accurate information will be appreciated.

Now notice that there are no local minima for the wind speed shown - where are they?

In most cases, if you are not seeing a stationary point that you had expected to see, you should zoom into the region. 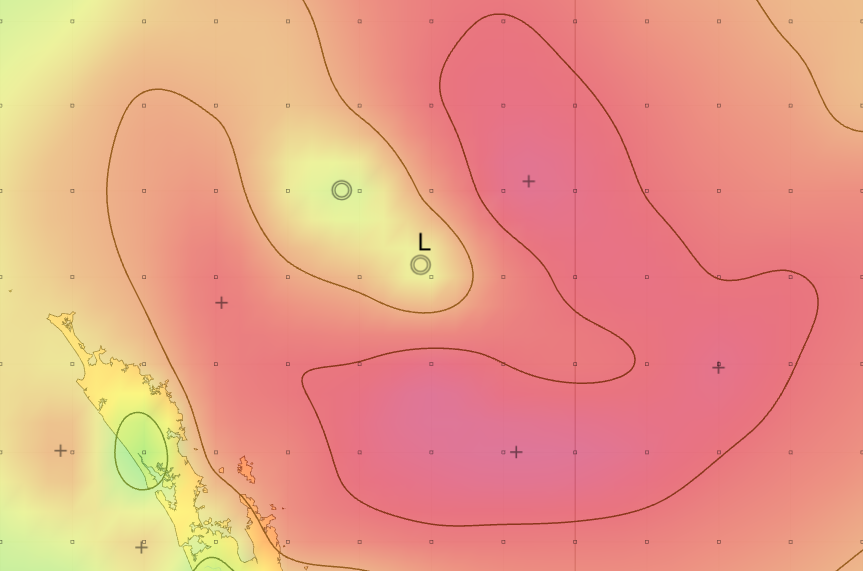 The wind speed local minima are now being shown - they are the ◎ symbols. In the earlier image, the application had decided that by showing all of the symbols that the image would appear too cluttered, so it hid some of what it considered the least interesting symbols. As you zoomed in, the application has more room and displays more symbols.

(As a side note: there is a long history of using H and L to label highs and lows in pressure fields on weather maps. As far as I know, there is no corresponding standard way of displaying the local minima and maxima for wind speed, or point of maximum rainfall, and so on. You are of course free to make your own choices for labeling these points.)

As in many other areas, LuckGrib strives to create high quality and accurate images when presenting all of the information that it does. This includes the discovery and positioning of the stationary points that can be shown for any of the contour maps it generates.

LuckGrib may produce more stationary points (H and L labels on a pressure field for example) than you are used to, but you will quickly learn to read these images and simply ignore some of the symbols.

Rather than making a choice on which of the stationary points it finds will be important to you while ignoring the rest, LuckGrib leaves that choice up to you - it gives you access to all of the points that it finds.