Introduction to Passage Planning on macOS 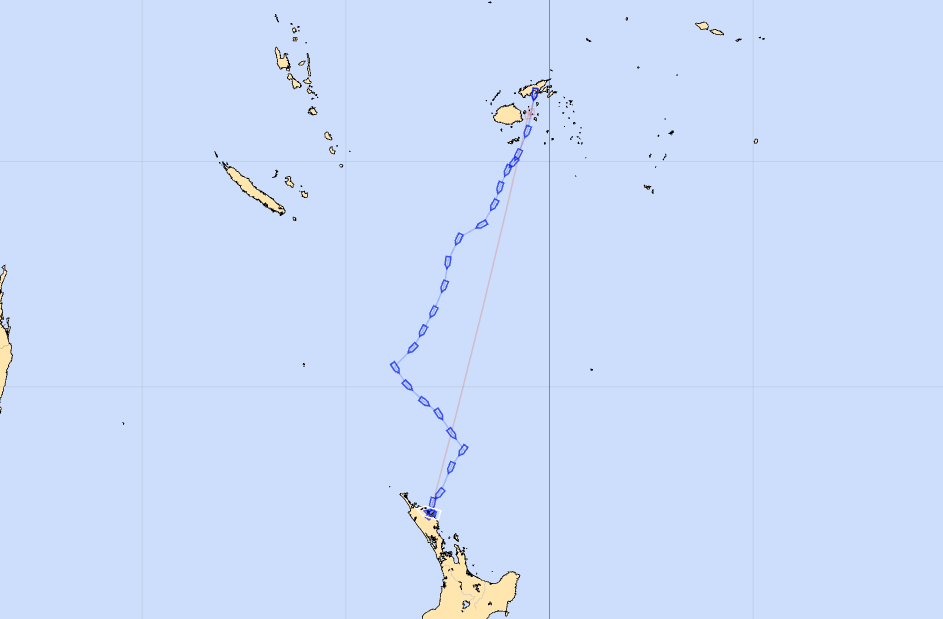 Introduction to Passage Planning on macOS

Passage planning normally falls into two categories: departure planning and planning a passage while underway. This article will touch on both of these topics, but not go into great detail with either.

There are a few steps you will need to accomplish in order to get started with the Passage Planning tools in LuckGrib.

For purposes of this tutorial, I’ll be working with a passage from Savusavu, Fiji to Opua, New Zealand.

Initially, there will be no routes: 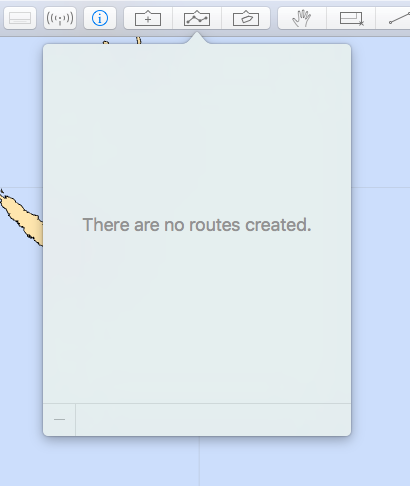 The first step is to select the Points and Routes tool:

I want this route to start just outside Savusavu, so I first pan and zoom into that area. Then click on the map at the point you want the route to start. At that point, a menu will appear with two choices. Select the Create Route choice. 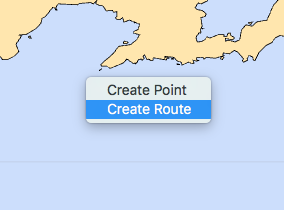 After that is done, the first point for the route will appear where you clicked. I want the second point to be further south, so I pan down a little, click at that point and again select from the menu: 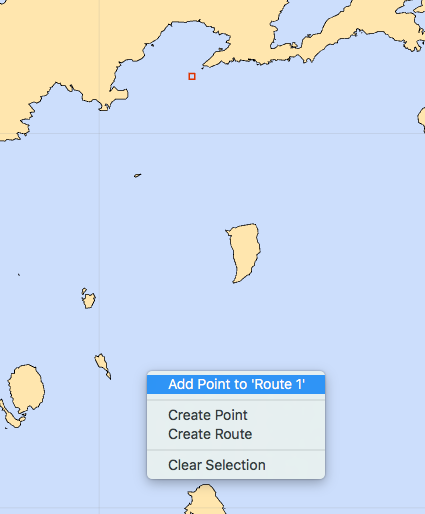 Continue this process until the route has been created. I used four points for this route.

Now open the Routes editor and rename the route: 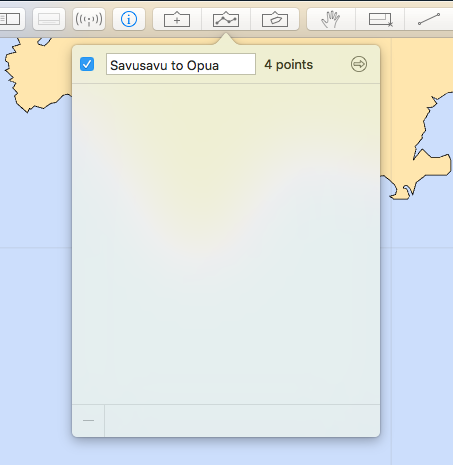 You can edit the route by clicking on any point and dragging it to where you want it to be. If you click on a route leg, you will have the option of: inserting a point into the route; renaming the route; or deleting the route. Double click on a point to bring up a menu that allows you to edit the point or delete it.

At this point, the route is finished.

It is unlikely that when you sail this passage that you will follow the route exactly. As you sail, you will meander back and forth as the wind dictates. Do not try to incorporate all of these little details into the route - keep the routes simple. Leave weather routing decisions for later, when you start to create position reports.

The second step is to create a vessel. Initially, there will be no vessels created in the app. Use the Vessels editor to create one: 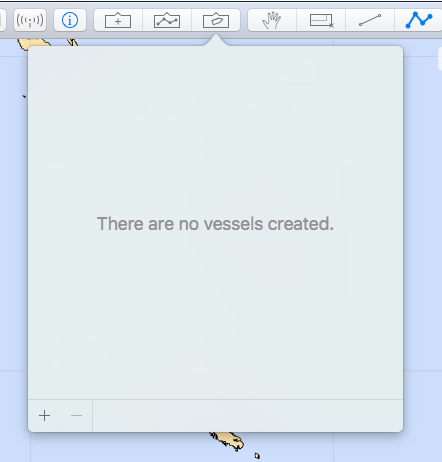 My sailboat is called Luckness. I average around 5.5 knots on a passage. To create my vessel, I click on the + icon and provide the proper information. 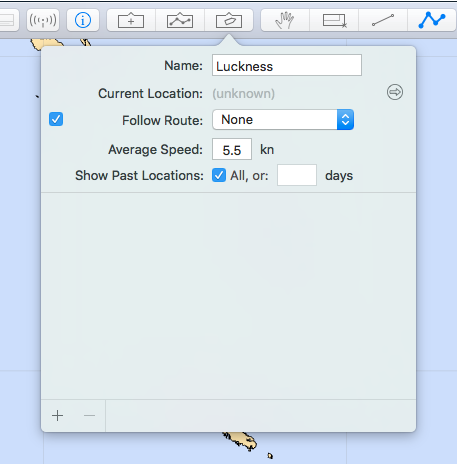 Since I will be sailing the route I created earlier, you can also select the Follow Route menu and select Savusavu to Opua.

The vessel doesn’t have a location yet. There are several ways of adding positions to a vessel. I’ll show you the way which will also be used while you are on passage and updating your current location.

Make a note of the latitude and longitude of were you want the vessel to start. This is done easily by moving the cursor and making a note of the values that are shown on top of the screen. While you are on passage, the latitude and longitude will be read off of one of your GPSs. Now open the Create Points editor and type the following line into the Create position report field:

At this point, you should see the first vessel location appear, outside of Savusavu. You can examine this position report in the Vessel editor, by opening the position report editor: 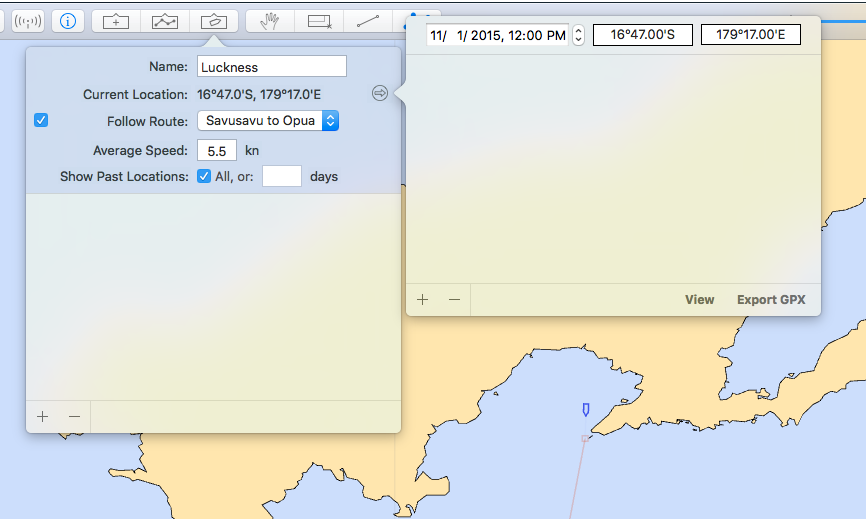 During departure planning, you will be downloading new GRIB files each day. Normally these files will contain quite a lot of detail and probably cover a wide area. The size of these files may be several hundred KB. While you are underway on a passage, you will be obtaining much smaller files, but as long as you are close to land and the internet, you may as well obtain large files.

To test your departure given one of the files, you need to create a new position report which records the start of your passage.

For example, I downloaded a forecast on November 3rd, 2015, and I wanted to test my departure for that afternoon. To create the required position report you could type the following into the Create Points editors position report field:

or alternatively, you could open the position report editor for Luckness, click on the + icon, and edit that field so that it departs at the correct time.

After setting the appropriate position report and selecting the vessel, I see that in the first evening I would be sailing in decent wind, although with the wind far ahead of the beam. The apparent wind is being calculated as 16 kts at 40 degrees, port. This is assuming an average boat speed of 5.5 knots - you must be careful with the apparent wind shown, as, if looking at the conditions you determine you will be going faster or slower, the apparent wind will change. The apparent wind is an approximation only! 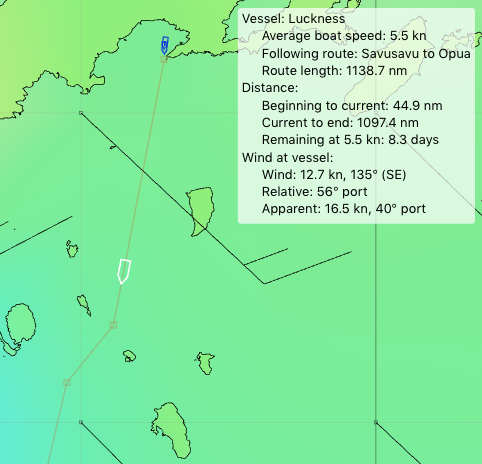 By the following evening, I would be in a pocket of little wind. Note that in this case the apparent wind calculation is going to be way off, as Luckness won’t be sailing at 5.5 knots when going upwind in 7 knots of wind. 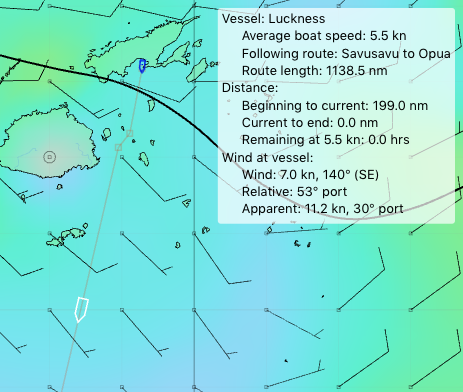 So far, this departure date is looking not that great. Calm winds a day and a half after departure. As I advance the GRIB time further, I see something that I don’t like at all: 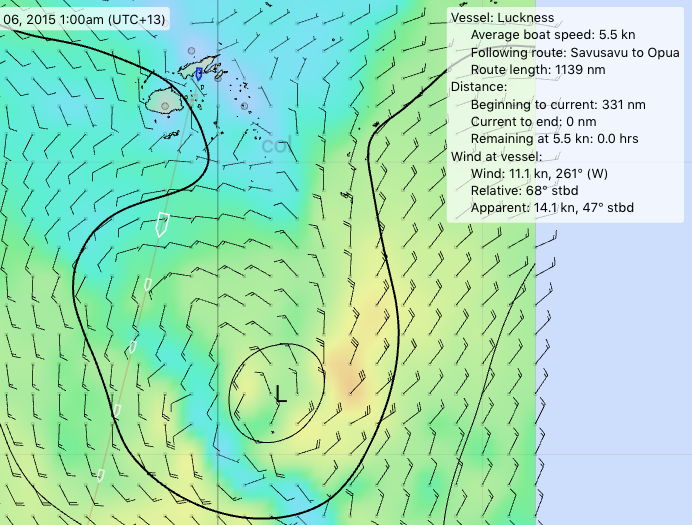 Two and a half days after this departure a circular low starts to form south of where I would be. This is 72 hours into a GFS forecast, which will likely correspond somewhat to what happens in reality. As I look at the forcast further out in time, I see the low deepening and moving south - but the uncertainty in the forcast and the seriousness of encountering a circular low between Fiji and New Zealand is enough for me to abandon this departure date.

I continue to download daily GRIB files and examine them. Light winds settle into the area around Savusavu, and not wanting to motor for a day, I choose to keep waiting. At around November 7th I start to see something I like.

To test a November 9th departure, I open the Vessels editor, and then the position reports for Luckness. Edit the date of the top position so that it shows November 9th rather than the 3rd. 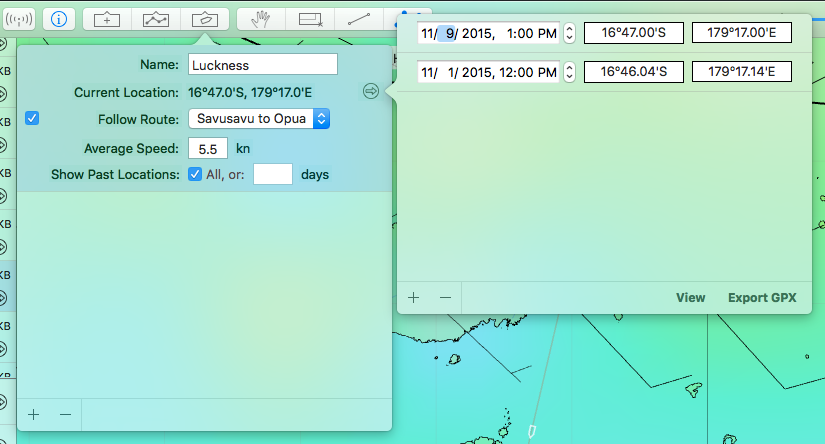 One of the tricks with a departure from Savusavu is that the first 24 hours of sailing is done fairly close to land - so I want decent wind that will allow me to at least clear all of the land to start with. Around 12 hours after leaving on this departure date, the wind is looking good: 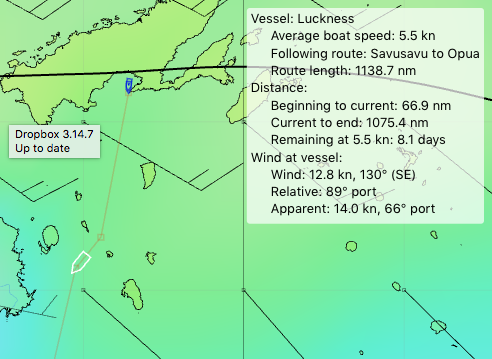 After 24 hours, I would still be sailing. Luckness can sail upwind in 9 knots and make decent speed, although not the 5.5 knot average, so the apparent wind shown will be wrong - the wind will be further back toward the beam. 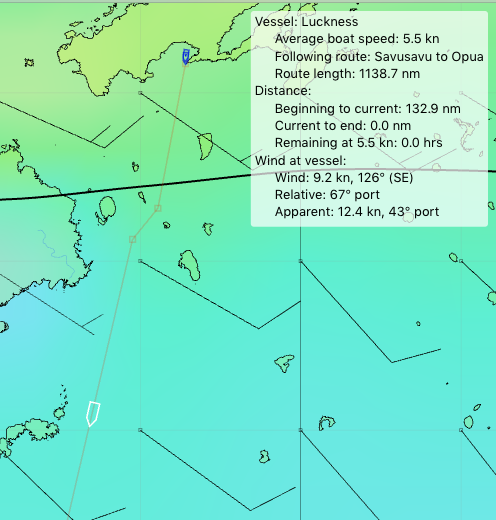 The forecast continues to look ok. Four days after departure the winds have turned to be far ahead of the beam and stronger, but not too strong. The other piece of information I am balancing is that the Visa I was staying in Fiji on was going to run out soon, so I would like to depart before having to renew it. Here is four days out: 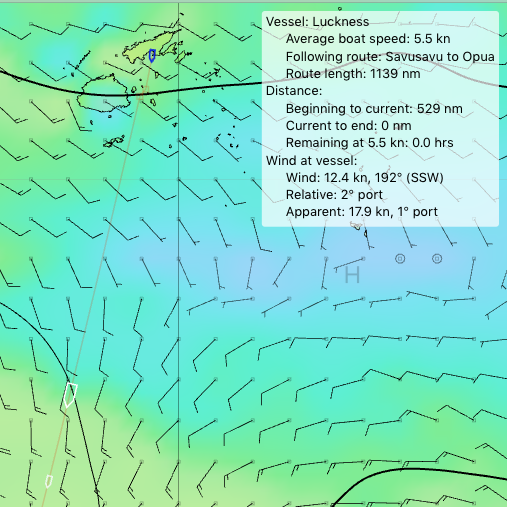 Note that by day four, I am already 132 hours into the forecast. This is starting to be a long time - the conditions that actually appear could be quite different from what the forecast is showing.

Looking through the rest of the forecast, nothing stands out as being dangerous. A high forms south of me, but its at 1020 which is a nice intensity for this passage.

I decide to leave on this weather window, do my last provisioning, and check out on the 9th.

The first part of the passage went pretty much as I expected, I sailed south, caught a patch of light wind: 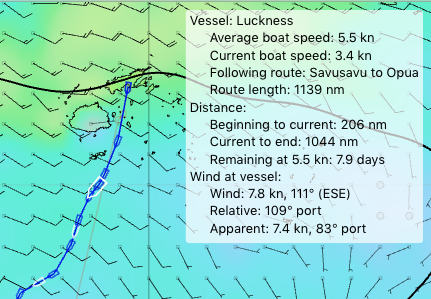 The wind started to head me, so I sailed slightly more west: 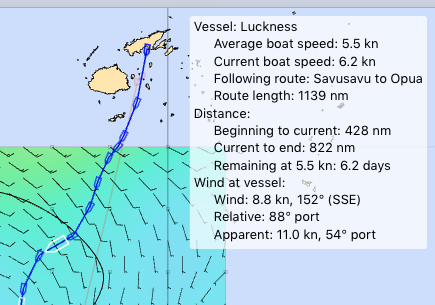 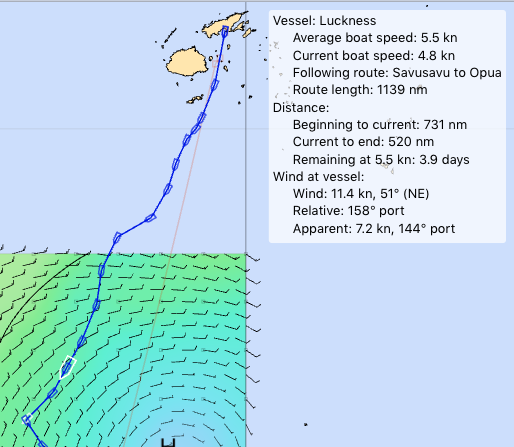 There is a front approaching by the 17th, with the wind that follows expected to be from the south (from where I want to go.) 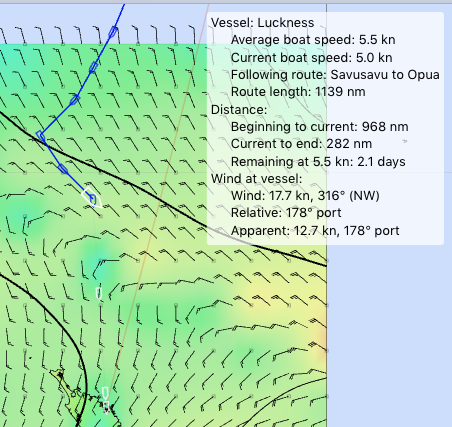 The plan is to take the front, then head SE as best I can until the winds turn SE, then tack and head directly to Opua: 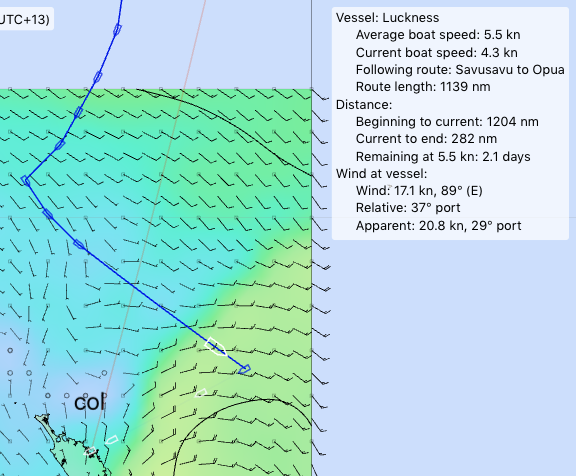 The position report in the image is not an actual position, it simply demonstrates an intention.

At around midnight on the 19th, the wind had backed and I was able to tack: 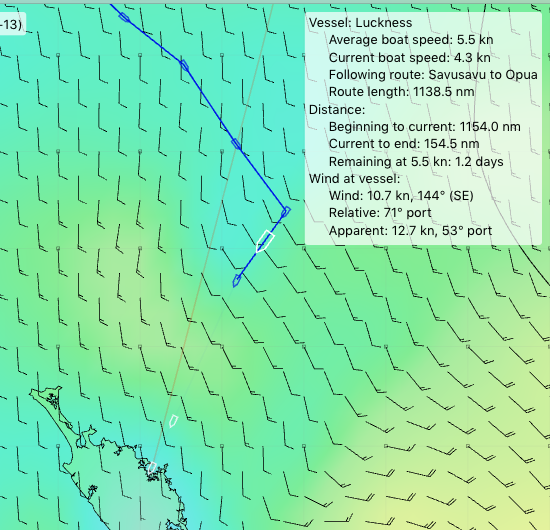 From that point on, it was a nice downwind sail into Opua.

Reporting positions to others

Many sailors send out reports to others about the conditions they are experiencing, how many fish they have caught, the stars, as well as their positions. I have found that while reading these positions, they are often very difficult to interpret. The location is normally just fine, but determining when they were at that position is often difficult. Often the time is not reported, or a time is given, but the time zone is not obvious.

LuckGrib is now able to show you position reports in a format which is unambigious. This format can be cut and pasted directly into the Create Points editor for position reports to be created. This serves several purposes:

For an example of this, here is the Luckness positions after this passage: 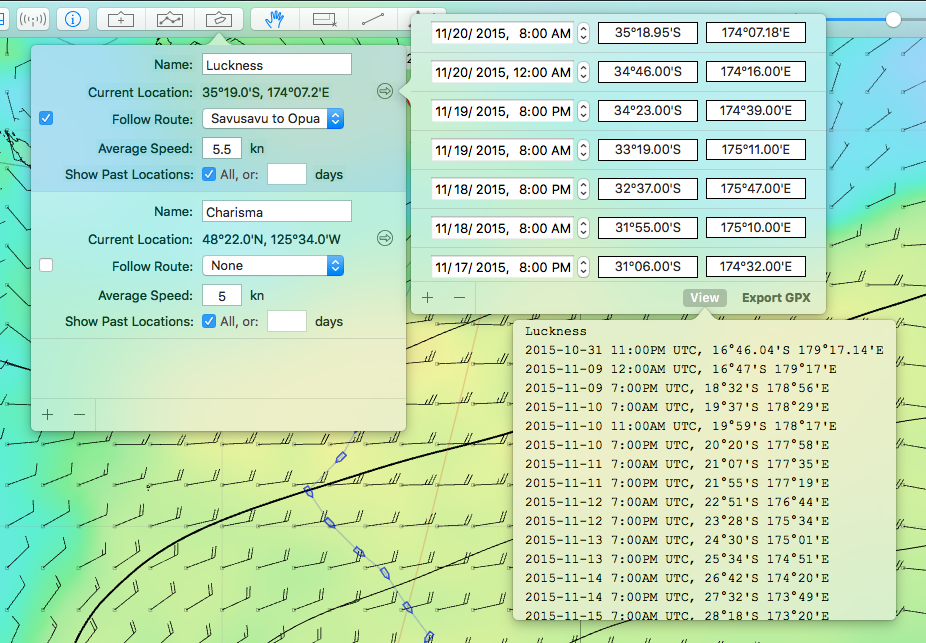 Simply, select the text you would like to capture, and then Edit->Copy it.

If you would like to experiment with this passage, first create a vessel called Luckness, then copy/paste the following lines into the Create Points editors position report field:

When I post blog reports from Luckness in the future, I plan to include several of these position reports, for those interested either in following me, or recreating my passage later.

All of the position reporting functionality in LuckGrib is new. I don’t know of any other applications which address this area in this way.

I will be using this functionality for the first time as I sail from New Zealand back to Seattle, and will likely discover some things I would like to change along the way.

If you use the position reporting functionality in the app on a passage, you may find that you have suggestions for how you would like to see it evolve. Please let me know!