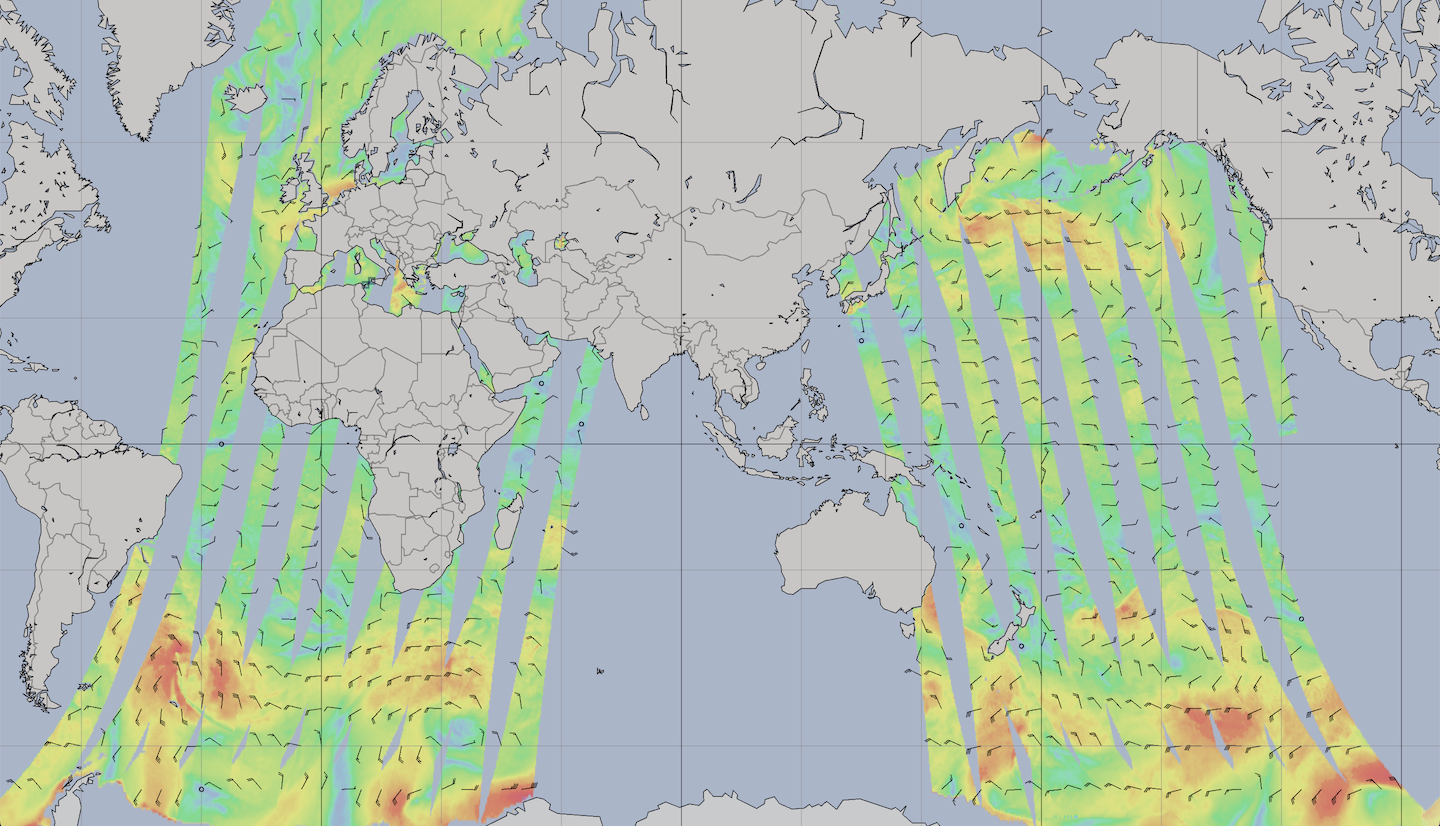 Note: the Download delay is the amount of time required for the GRIB model to compute its forecast and then for the LuckGrib cluster to download the data and make it available. The LuckGrib delay is generally less than 10 minutes, the remainder of the delay is the model compute time.

The purpose of this model is to provide timely ocean wind observations. ASCAT wind data can act as a source of truth for what the actual wind was at a location and time on the ocean.

There is a large network of weather stations that provide real time measurements of the wind, however these stations are mainly confined to land areas. There is a sparse collection of buoys on the ocean which provide weather observations, however these buoys are largely concentrated in areas relatively close to shore. There are large areas of open ocean that do not have any buoy’s present, and finding wind observations for those areas can be difficult. 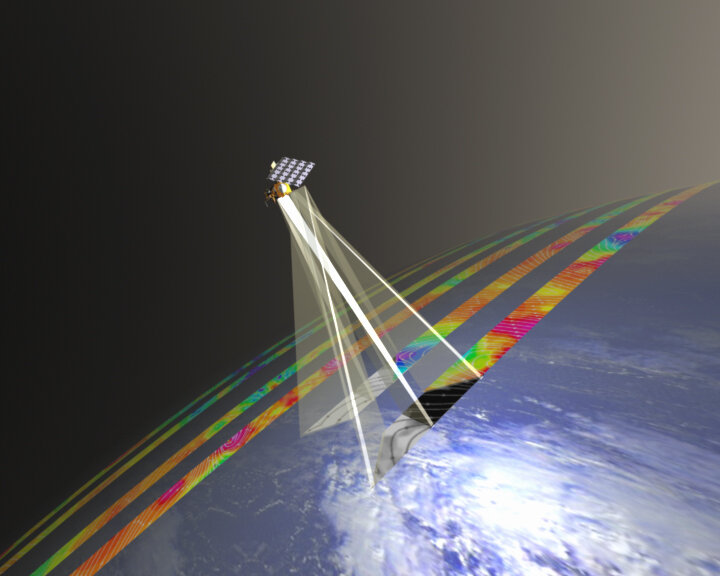 The following description has been taken directly from the NOAA Office of Satellite and Product Operations (OSPO) product page:

The Advanced Scatterometer (ASCAT) winds products are processed by NOAA/NESDIS utilizing measurements from the scatterometer instrument aboard the EUMETSAT Metop satellites. The instrument uses radar to measure backscatter to determine speed and direction of winds over the surface of the oceans. …

Why use ASCAT data?

The ASCAT data are observations not forecasts, they provide a source of truth for the actual ocean winds.

There were many alternatives available in deciding how to present this data in GRIB form. This section is meant to explain some of those choices. 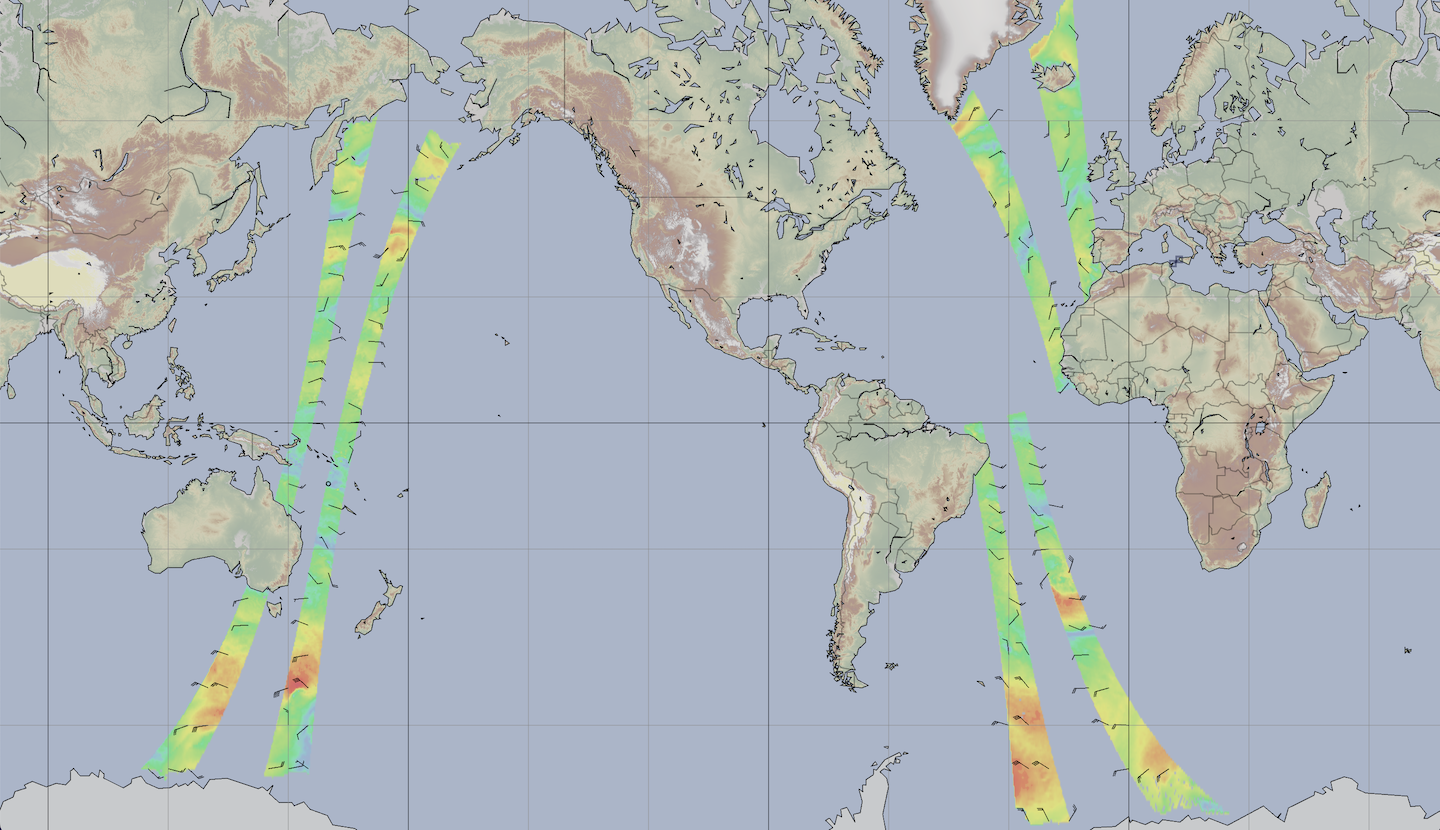 The reason for the slant in the data swaths is that the earth is rotating beneath the satellite. After a little study, you can recognize which data is from an ascending or descending swath by its orientation. Each orbit takes roughly 1hr 41min.

During the development of this version of the ASCAT model, one of the first experiments on how to package it for use by users was to present single orbits of data in the GRIB file, with the two satellites each in their own record. This presentation ended up being quite difficult to use in practice.

After a series of experiments, the final form for this model was chosen: For example, a GRIB record with a 15Z reference time may contain data from 09Z through to 15Z. This makes the 15Z data ideal for validating the 12Z forecast.

Read that sentence above again, as its crucial in using this data. If you want to validate GRIB data at one of the synoptic times, choose the ASCAT data 3 hours further into the future, and then that record will contain 6 hours of data, centered on the synoptic time you are interested in.

Of course, there may not be ASCAT wind data available in your area of interest at the forecast time, but you can start there and then search to find the freshest data for your location.

Note that each area in the world has an opportunity for a new update of data roughly every 12 hours. While there are two ASCAT satellites, they are closely aligned with each other. There is probably a good sciencey reason for this which escapes me…

Lastly, note that you may be interested in an area which is missed by the ASCAT data swath for any particular orbit. In this case, you can either look for older data which does pass over your region, or attempt to interpolate from data if it appears relatively close by.

Time at each sample

In addition to the model providing wind data, it also provides the time at each sample. In particular, it provides the number of seconds prior to the reference time. Using this data, it is possible to determine the time for each wind sample.

LuckGrib will display the valid time for each wind sample, as text, if and only if the GRIB time is exactly on one of the GRIB record times. When working with ASCAT data, you should ensure that as you alter the time in the app, that you use the app’s ability to move to the previous or next GRIB time (left / right arrow keys on Mac, central radial menu next / prev commands on iPhone and iPad.)

When this is done, you will see an information display such as:

If you do not see the line showing the valid time then either the file does not contain the time parameter, or the current GRIB time is not placed exactly on one of the synoptic times.

When comparing forecast data to ASCAT observations, you should be aware of the time you are looking for, and the time at each ASCAT sample.

Its possible to view a visual representation of the time contained in an ASCAT model. For example:

There is no particular meaning to the color - red is no better or worse than green, blue, etc. This image can be used to identify edges of ASCAT swaths. Time will vary slowly within a swath, following the orbit of the satellite. When you move from one swath to another, the valid time may jump quite a lot. For example, this area of the ASCAT image contains many overlapping swaths, as shown by all the differnent colors. Its just something to be aware of as you work with this data.

Timeliness of the data.

(The credits section below describes the cast of characters mentioned here.)

I believe the order of operations is something along the lines of:

When a new orbit file is available, LuckGrib downloads its content and processes the most recent (approx) two days of data into a fresh model run.

If you use LuckGrib to download ASCAT data for a large area, frequently, over the period of 6 to 12 hours, you will see the final GRIB record slowly accumulate more and more orbit data.

The ASCAT model on the LuckGrib server updates frequently, but on a somewhat irregular schedule, ranging from 40 minutes to a little over an hour. The updates occur quickly after the data is available.

The primary source for the ASCAT data is EUMETSAT:

The Advanced SCATterometer (ASCAT) is one of the instruments carried on-board the Meteorological Operational (Metop) polar satellites launched by the European Space Agency (ESA) and operated by the EUropean organisation for the exploitation of METeorological SATellites (EUMETSAT).

The Royal Netherlands Meteorological Institute (KNMI) is involved in its processing:

KNMI is involved in the OSI SAF and the EUMETSAT Advanced Retransmission Service (EARS) ASCAT service as the centre where the Level 1b to Level 2 wind processing is carried out.

When reading material related to this data, you may come across references to EUMETSAT/OSI. OSI is the Ocean and Sea Ice department at EUMETSAT. There are also references to SAF/KNMI. SAF is the Satellite Application Facility at KNMI.

The raw ASCAT data is being obtained by LuckGrib through the Physical Oceanography Distributed Active Archive Center (PO.DAAC) at the Jet Propulsion Labratory (JPL).

Data hosted by the PO.DAAC is openly shared, without restriction, in accordance with NASA’s Earth Science program Data and Information Policy.